Can I just say?  I find it more than a little disconcerting that when looking up lyrics to this fabulous Shelia E. song I was directed to a website called “OldieLyrics?!”  Excuse me?  “Glamorous Life” from 1984 is considered an oldie?  What about the Beach Boys, and the Beatles, and Etta James???  Aren’t those oldies?  Rude.

Ever since I was a little girl I’ve had dreams to lead a “glamorous life.”  During recess in kindergarten, I would belt out “New York, New York” by Frank Sinatra, descend the wide concrete steps that led to the playground, and I was the perfect picture of glamour and sophistication. 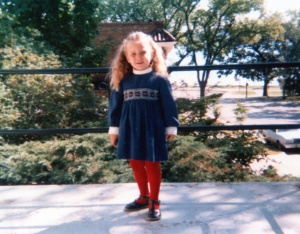 My Mom worked in radio, which I thought was terribly glamorous, so I often pretended to be a star that was being interviewed.  Or I was a disc jockey playing the hits and entertaining the masses.  Or…I was Madonna…who apparently I thought looked exactly like this…

By late elementary school I’d decided my fame and glamour would come from working as a high-powered attorney, like Grace Van Owen on L.A. Law, and that I’d then be elected as a high-profile judge and then later still I’d be elected into some high-ranking political office.  Now that is glamorous.  My sixth grade teacher even called me Judge or Your Honor.  Like…every day (thanks Mr. Brewton).  It was fabulous.

The path was clear in my head.  There was no way I wouldn’t be incredibly successful.  When my step-Dad surprised me for my birthday party in sixth grade with a limo, it was exhilarating, but in my mind it was simply a glimpse into my future and what would obviously be the most successful and glamorous life.

Growing up, dreaming of what my life would become, I never in a million years would have thought that a typical Tuesday night might include me wrestling the egg of a baby Canadian gosling from the mouth of my puppy (I’m still gagging and obsessively washing my hands).  Or that on the same lovely sunny evening, I’d take said puppy for a walk, and the sunny skies above my neighborhood would release a downpour for the remaining 25 minutes of my walk (I still feel wet an hour and a half later).  Or that a successful day would be made up of getting work done (not lawyering or lawmaking or as a star), grocery shopping, and doing four loads of laundry.

Over the past couple of months I’ve done a lot of thinking about my dreams.  Where I want to be.  What I want to accomplish.  Who I want to be when I grow up.  And while being driven around by a guy in a leather trench coat IS incredibly appealing…it’s not really at the top of my priority list anymore.  That said?  You guys…I am capable of WAY MORE than I’m doing right now.  Not that getting a gooey egg away from a dog doesn’t take skill…but seriously…I am meant to do more than this.  I’m meant to work harder than this.  I’m meant to be doing something bigger.

Here’s where it gets tricky.  While I know that I’m not in the right place professionally, and while I know that I’m meant to be doing more than I am now, I have no idea what to do with this information.  My husband says I need to buckle down where I am, and then in every spare waking second of the day, I need to be focusing on my writing.  All the time.  Every moment.  My friends and Cousin A think I need to jump at the opportunity that presented itself last week while continuing to write.  And I am utterly confused and feel like the best course of action is probably to throw up my hands and do nothing.  Which we all know will serve me incredibly well and leave me filled with joy.  Right?

From the time I was so little I’ve been surrounded by people who believe in me and expect me to find great success.  And for the most part I’ve been on-board with that and have continued to move forward with focus and drive.  Yet, right now, I feel like I’m moving forward with no road map and no particular destination.  You all know how crazy I am about NEEDING a plan.  Yes…well…I’l like a plan please.  Like right this second.

Truth is…my life is pretty great.  I adore my husband.  He’s handsome, and funny, and supportive, and wants nothing but ridiculous success for me.  I have the loveliest little girls.  They are the loves of my life.  I have this awesome family and phenomenal friends.  I even like this tiny house of ours.  And for the most part?  I know what I want my professional life to look like.  I have the ideal work situation figured out in my head.  I’m just not entirely sure how to get there.  And that?  That right there?  It’s driving me mad.

So…where does that leave me?  I guess, for the time being, it leaves me working, moving forward, and waiting for that plan I long for so badly to appear.

TODAY:  What if the glamorous life I’d always planned for is just around the corner?  What if it’s different than I’d originally thought but it’s going to be perfect nonetheless?  And what if I just need to be a little patient?

One thought on “Wanted: The. Glamorous. Life.”