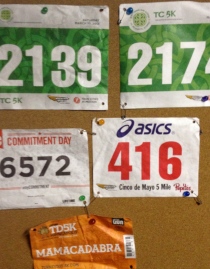 In 2006, I was managing a marathon training program that was linked to fundraising for a nonprofit.  We would recruit people to sign-up for a marathon, we would help them train, and they would raise thousands of dollars for us.  I’d been working in this capacity for about six months when we learned that the program was going to be discontinued nationwide within a year.  One blustery Saturday morning, I was facilitating a recruitment event at a local hospital.  Those who signed-up would train with us or six months, all the while we’d help them raise money, and then we’d fly them to places like Hawaii, Miami, San Diego, and Phoenix to run their marathon.  As I went through my schpeel, something that by then I could have done in my sleep, my mind started racing.

Wait a minute…wait just one minute…maybe I should run this marathon!

It is, after all, the LAST ONE that my organization is sponsoring.

When will I have the chance to train with coaches, and have the full support of my employer, if I don’t do it NOW?

What is there to lose?

After the hospital recruiting session I had plans to meet one of my girlfriends for lunch at Chili’s.  I love me some chips and salsa from Chili’s.  I was so excited to share my thoughts with her I could hardly handle the drive over.  I saw her and the words quickly flew out of my mouth.  I’M going to run the marathon in San Diego, I have to raise $4,500, I am going to train for the next six months, isn’t it awesome?!  And she looked at me like I had lost my damn mind.

And maybe I had.  I trained for six months, I ran all the short runs and the long runs, I got the right shoes, I got all the products necessary to avoid blisters, to avoid chaffing, to replace electrolites, etc.  I was all set.  I ran the marathon and I can safely say it was one of the worst days of my life.  For reals.  I ran with my girlfriend, and colleague (I’d selfishly convinced several colleagues to run since it was the “last one”) and the first 16 miles were a breeze.  Really, they were lovely.  We kept a good pace, we were cheerful, joking around and interacting with the lovely people of San Diego who came out to cheer us on.

It’s when we hit 16.1 miles that things started to get ugly.  And ugly it got.  Those lovely people of San Diego?  Yes…well…they were out drinking their mimosas, all smiles and preppy and tan with white teeth, I wanted to punch them in the throats.  HA HA HA…must be nice drinking at 9am watching us idiots kill ourselves to be able to say we finished a f-cking marathon.  I’m not certain, but it’s possible we actually gave the finger to people who were waving at us.  It’s kind of a blur so, as much as I’d like to say I only dreamed of flipping off innocent bystanders, I can’t be sure of that.

By the end it hurt too much to walk, but running hurt too.  We were barely able to maintain the bitter sarcasm that had taken us from mile 16 to mile 24.  We were speechless.  We were on the verge of tears.  And I’d venture to guess that both of us were wracking our brains to figure out how we could get out of finishing that horrible race.  We finished on a Marine base which, when we were still training, sounded like a splendid way to meet future husbands.  In reality, we wanted to sling profanities at them as we passed them by and they looked all proper in their fancy uniforms…THEY weren’t running 26.2 miles now were they?!

It took over seven hours.  Followed by, for me at least, a good long time in the med tent.  I was very dizzy and very nausious.

When I returned to Minnesota I had zero interest in running.  None.  Nada.  After about six months, however, I got antsy to run.  There were a couple of really great paths and routes around my condo that made three and five mile runs quick and easy.  I started running nearly every morning before work (how very organized and on top of things I must have been to pull that off!).  I loved the quiet of early morning.  I loved being outside when it was still a bit chilly.  I loved being done with a workout before my day had even begun.  I mean…it felt like success every day.

When my husband and I started dating I was still running.  He’d bring me to his gym and he’d lift weights while I pounded out five miles on the treadmill.  I felt like a rock star because of the running.  As we continued to date, I kept it up to a point.  The six months prior to our wedding I ran every day after work, regardless of weather or how I was feeling.  I’m sure, during that time, that the running saved my life.  It was such a difficult year and our lives and relationship felt so up in the air and troubling.  Running was my opportunity to get the eff out of the house and have some time to myself.  Time away from the noise of our unhappiness.

For the past couple of years I’ve fallen in and out of love with running.  I do like running the 5ks with my girlfriends, for the most part, but I haven’t loved the actual running in a long time.  It’s felt like something I should be doing.  Something I really need to do.  Something that should make me feel more accomplished.  Right?

Last year when I got injured I was so indignant.  I went on and on about wanting to be able to run but the damn injury was preventing me from doing so.  I lamented about finding an alternate way to get a good cardio workout into my routine without running.  Whatever would I do?  And while I did (kind of) feel those things…I was also a little relieved.  Because for the love of Pete it gave me permission not to run.  Thank God.  Finally.

I was eventually able to run again, though, so I signed up for more 5k events and, a month or so ago I signed up for this ten mile.  This week, when my injury flared up I had feelings of failure, and a little despair, because I had a PLAN damn it.  A plan to train, a plan to run the ten mile, a tentative plan to run yet another in late October.  But I’m going to be completely honest and tell you that I also saw a small glimmer of hope that maybe, just maybe, the running can just stop.  For good.  And then, for good measure, I felt pangs of guilt for feeling such things.

I’ve taken the week off, and tomorrow I’m running a 5k with one of my girlfriends.  It’s the run that will help me determine how to move forward.  If it doesn’t hurt, I’ll keep going.  If it does, I won’t.  But today…after reading this phenomenal article…I’m wondering if I’m focusing on the wrong things here.  If running hurts, why am I doing it?  Just to be able to say I’m a runner?  If I hate every second of a training run, except for being able to say I did the training run, why am I doing it?  Do I really have so much time on my hands that I can waste one or two hours on training runs just for the pleasure of being able to talk about it?  And if that’s the case…seriously?  That means I’m running just for the sake of appearances.  I’m sorry…but I don’t do things simply for the sake of appearances.  I don’t have the energy.  Running in an effort to “appear” to be a runner seems all kinds of ridiculous to me.  It was different when I enjoyed it.  When I felt like it was an integral part of my being and necessary for my sanity.  If that part is gone (at least temporarily)…what’s the point?

TODAY:  What if I need to be quiet for a second and actually listen to what my body is trying to tell me?  What if it’s time to change things up and find something new that I might actually enjoy?

PS – That said…I’ll be sure to post pics of tomorrow morning’s 5k!  Because that’s how I roll.